Would you believe it but Polyphony Digital has finally released the 2.0 update of Gran Turismo V…. and it is gonna be legen… wait for it .. daaaaarryyyy!!!!. At least it is supposed to be, cause this update is the most important since its unveiling. Strangely, this release intervenes one very single day before Forza 4 opening, the sweared enemy.

You will find all useful details infra, such as the new fast forward/reward functionality so much awaited.

But my comments today are aiming to underline the very tricky timing of this release, very inopportune to my point of view. We all have heard all around about the deceptive experience of Gran Turismo V and disappointed fans.. Honestly, am still a resilient defender of the crown for many reasons that you understand if you have been playing the game long enough..  but that’s not the point today, and with Forza4 waiting for its ultra fast launch controlled take off, GT5 is under an unprecedented level of pressure. To be clear, without the proper updates Gran Turismo could go even farer in the crowd disenchantment and loose one time for all a battle very sloppily engaged. Yet, for months now Polyphony has failed to reassure its community, and many of its deepest and most faithful admirers have turned their back to GT and taken their xbox out.

The problem is that, this 2.0 version put the fingers right where it hurts, proposing DLC (downloadable contents) both too late and ineptly. As an example, the 15 race cars pack is a nonsense in a year when so many amazing exotics have been attending. And for sure not many care so much about an nthhhh version of Japanese Gt championship RX7, not mentioning a “central torque detection matter on the Mitsubishi Lancer” which sounds like a bad geek joke..

Whatever, according to me and many of aficionados I have been talking and playing with, A Ferrari 599 GTO or an Aventador would a been such a better update to match players’expections. You think am though? why then Polyphony has been demonstrated in the past that they were able to make Lotus Evora and Ferrari California ready to play the same day of their presentation to the public at Paris Motor Show, and have so abysmally failed since to renew and enrich their game material?

GT remains my heart choice, but it really deserves here a bad point for such a wastefullness. The worst that we sensed for a while now, is Mister Yamauchi obsession for perfection that ultimately becomes detrimental to this game and its legend. 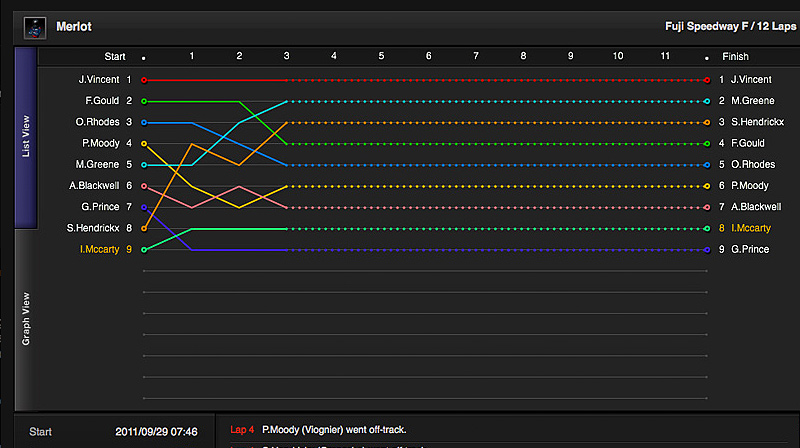 – Multiple car settings/save feature
We’ve added a setting sheet feature that allows you to save multiple car settings.
From the [Setting Sheet] on the lower right of the screen, you can check the current settings. You can switch between three settings A, B, and C, allowing you to change between your personal settings easily according to the type of race and your objectives.

– Avatar now usable in Photo Travel
An Avatar ON/OFF feature has been added to Photo Travel. Now you can photograph your avatar together with your car.
You can turn the driver avatar ON/OFF by pressing the △ button while positioning the car.

– Replay Fast Forward/Rewind
In replay video recorded after the 2.0 update, it is now possible to fast forward or rewind the replays with [Forward] and [Rewind] buttons.
You can now easily search for the scene you are looking for and repeatedly play back a certain section, making the photo mode even more fun to use.

-Improved Online Lounge
[Car Restrictions] has been added in the regulations. You can now choose categories such as « NASCAR » and « Super GT ». Also, the variety of cars that can be used in the shuffle race has been increased, and a « Shuffle Base » setting now allows you to set the performance level of cars allocated to each player.
For details, please see Top screen – [Manual] – [Online Race] – [Event Settings] and the « Regulation Settings ».

– Additional features to Remote Racing
A « Graph Display » has been added to the remote race screen in GT My Home of granturismo.com, where you can enjoy B-Spec racing. This allows you to see the changes in positions in each lap graphically. A time difference display for each car in the race has also been added.

– New Photo Stage Added
The « Indy: NASCAR Pit Stop » has been added to photo travel, check out the pit scenes of this US based motor sport.

– Addition of the Consecutive Login Bonus
When a user logs in consecutively, a bonus will now be applied to experience and race rewards.
It will increase to 110% in the 1st day, 130% in the 2nd day, 150% in the 3rd day, 170% in the 4th, to a maximum of 200% in the 5th day. This will apply to all events both online and offline, so logging in every day will make the game progress faster.

– DLC (Downloadable Content) Compatibility
A [Downloadable Content] button has been added to the lower right of the top screen. Here you can install the downloaded content purchased from the PlayStation®Store.
Please refer to the product information page of gran-turismo.com for details regarding downloadable content.
*The release of the DLC is planned for 18th October, 2011.

[Other Improvements]
– Improvement of the User Interface
– The Quick Menu can now be accessed while the race is loading.
– It is now possible to save and resume endurance races.
– Two NASCAR cars selectable in Arcade Mode have been changed from the 2010 models to the 2011 models.
– In the Arcade Settings of [Options], the AI Car Characteristics setting has been added. You can now change the aggressiveness of the AI against you in Arcade races.
– Some effects of Traction Control have been adjusted. When the TCS level is set to 1, it will not come into effect as much especially in tight corners on dirt tracks.
– Surface Water and Tyre Load Indicator displays have been added to the race screen. The Tyre Load Indicator can be set from the Quick Options that is displayed during the race when the game is paused using the START button, or the standard Options menu.
– The option to Create Thumbnails of All Cars has been added to the context menu of the Garage. This will update the thumbnails of all cars in the garage.
– Experience gained in online races have been increased by 60%, and rewards have been increased by 66%.
– You can now change the Slipstream Strength setting in the lounge.
– In the Lounge and in [Option] – [General] – [Arcade], it is now possible to turn Visible Damage ON or OFF.
– A Drivetrain setting has been added to the regulation settings in the Lounge.
– A setting to prohibit « Tuning » of cars has been added to the regulations settings in the Lounge.
– Adjusted the driving speed of formula cars in banks, and auto-drive when coming onto straights.
– Added a button to [Reset Playlist to Original Settings] under the settings menus of [Menu BGM], [Race BGM] and [Slideshow BGM].
– User BGM can now also be set in [Slideshow BGM]
– A new brand « AMG » has been added to the MUSEUM.

[To Check Your Current Version]
To check the version of your software, press the « Manual » button at the bottom of the main menu screen. The version number will be located on the upper left of the index page in this manual.

If the number starts with Ver. 2.00, you are playing the latest version of the game.

If not, please press the PS button and quit the game. The game will be updated automatically when you restart it with your PS3™ system connected to the internet.